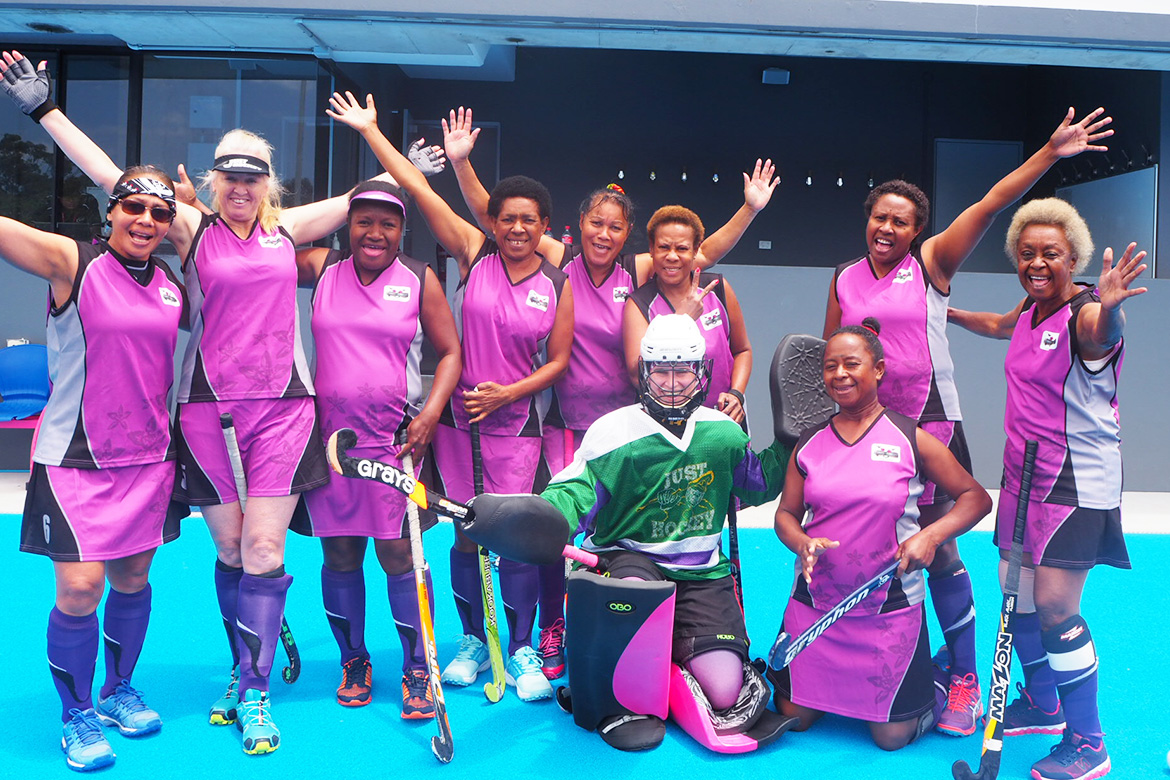 “I grew up playing hockey in PNG, so I know equipment is expensive and hard to come by,” Dawn said.

“Kids are carving hockey sticks from trees and playing barefoot, which means so many injuries.”

The Gold Coast Hockey Association put the call out for equipment donations when they learned of the plight of PNG junior hockey.

Dawn and her team The White Orchids say the donations will fill a genuine need.

“Hockey is a family sport we love in PNG, but our clubs are struggling so it’s brilliant to hear of the donations campaign,” she said.

“A lack of equipment is definitely a barrier to playing at hockey tournaments since they require shoes and mouthguards for safety.

“Junior hockey is continuing to grow so we are grateful for the donations that will go a long way to help children enjoy their favourite sport safely.”

The White Orchids have been playing at the Pan Pacs since 1996.

“The team have been selling doughnuts and ice blocks for two years to save money for their plane tickets; their families even chip in,” Dawn said.

“Coming to the Pan Pacs means so much to them because hockey is such a big part of their lives and brings people together.”

The equipment campaign has inspired Dawn to visit PNG again after moving away ten years ago.

“My nieces play hockey back in PNG, so I would love to visit and see them using new equipment,” she said.

“I left PNG for security reasons, it wasn’t safe over there for me as a single mum.”

“In the hockey community, if one person spreads the word it has a domino effect,” Kathy said.

“We have already seen teams getting behind them by rummaging through their garages for equipment to pass on,” she said.

“The White Orchids are beautiful people and skilled players who are so thankful for anything we can do. We have also had Aussie girls fill empty spots in their team so they never had to play short.”

Donations can be left at the Gold Coast Hockey Centre at Musgrave Avenue, Labrador until 5:00pm this Saturday evening (10 November).